How to Run the W2 Premium Info Report

The W2 Report provides the total premiums for active coverage within a specified calendar year. The generated Excel file will list each enrolled employee in a separate row. All reportable coverage applicable for the specified calendar year will be listed in separate columns to the right of the enrolled employee's name. Coverages of the same type (i.e. Medical, Dental) will be listed side by side followed by a column containing the total annual cost for all applicable premiums. The ending two columns provide the sum total amount for Cobra coverage premiums (Cobra Amount) and the annual premium total, including any Cobra premiums (Total Yearly Premium with Cobra). The W2 Report will calculate the premiums for months in which a coverage change occurred based on each client's set bill date. If a change to a coverage is made prior to a client's bill date, the premium for the new coverage will be used. Conversely, if a coverage change occurred after the client's set bill date, the previous coverage rate will be used. The report will also use the guidelines set by each client for Newborn billing when calculating the premium totals.

The generated file will include all enrolled employees' Social Security Numbers and full names.

Clients will need to designate the coverages that should be included in the report. When the report is generated, annual premium totals for each designated coverage will be calculated and displayed for each enrolled employee. The column headers will contain the name of each coverage. If an employee did not elect a designated coverage for the reporting year, the premium amount for the coverage will be listed as $0.00 for that employee.

Premium costs for elected Cobra coverages will not be included when calculating the amounts for the Benefit premium columns.

The Total Yearly Premium Costs column will display each enrolled employee's annual sum total for all applicable coverages that were effective within the reporting year.

Please follow these steps to run a W2 report: 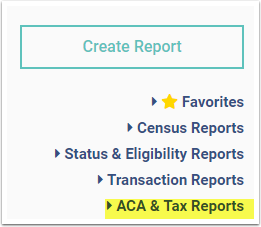 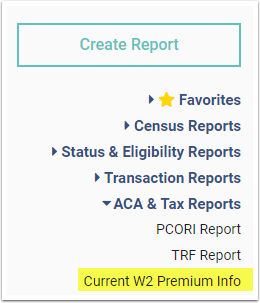 Applicable coverages for the W2 Report must be specified when the report is set up on the site. Generated W2 reports will only include premiums for the specified coverages.

If none of the employees have elected a coverage that was set up to be included in the W2 report, the report will not include a column for the coverage.